ICARP Case Studies Back to Challenge

In the wake of the 2017 wildfires that destroyed 5,300 homes, the City of Santa Rosa and County of Sonoma have partnered to rebuild burned homes and accelerate new housing development to address a long-standing shortage with heightened attention to adaptation and resilience.  They have formed a Joint Powers Authority (JPA) known as the Renewal Enterprise District (RED) to create a trusted, replicable, and enduring model of community development.  The RED Board has endorsed a goal of creating 30,000 new homes countywide by:

RED launched as a two-year pilot in December 2018.  At the close of 2020, the Board will assess results including how the RED is advancing overall climate adaptation and resilience, and may invite other Sonoma County cities to become members of the JPA. 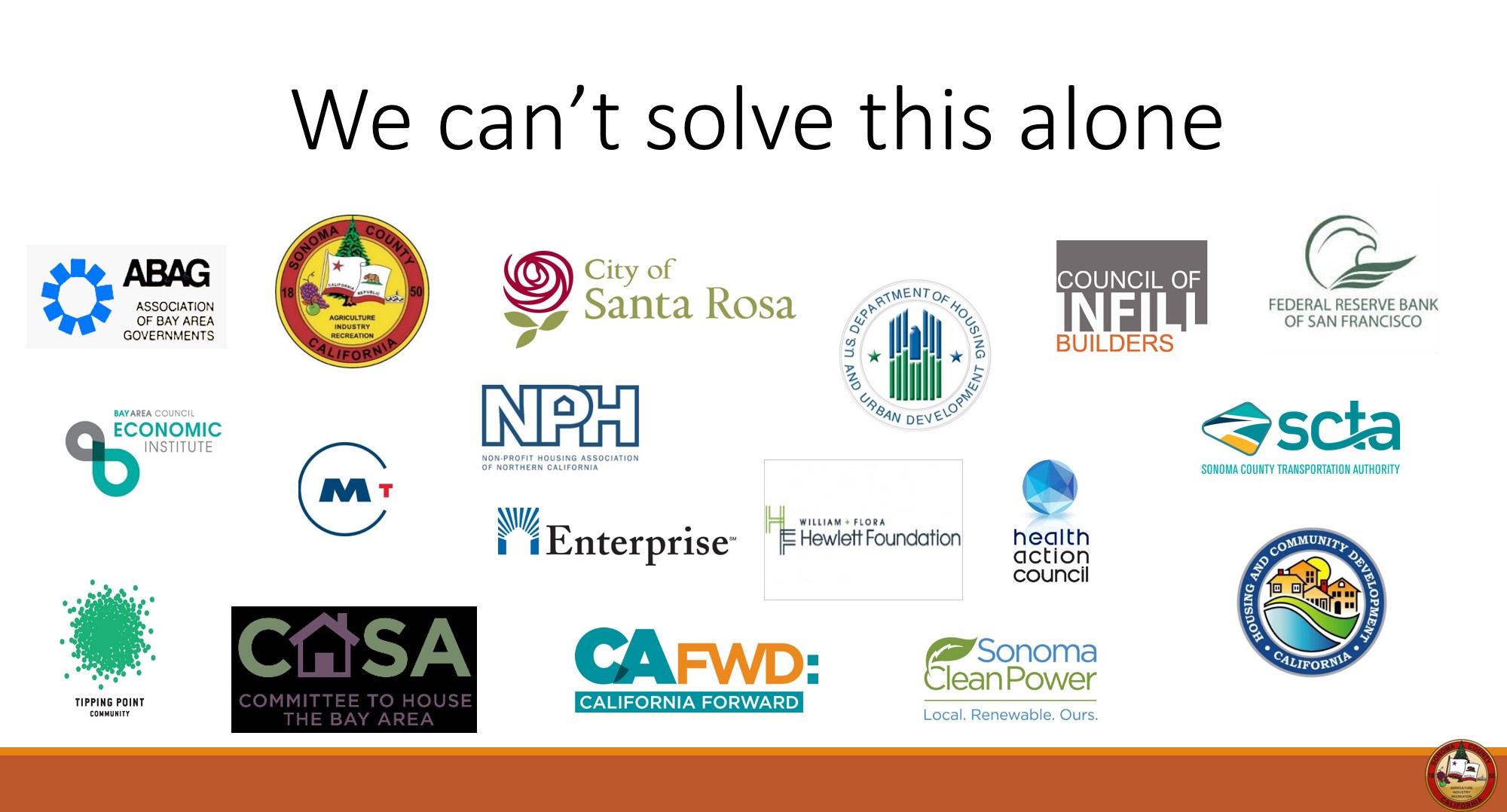 The two founding members of the RED JPA are the City of Santa Rosa and the County of Sonoma. In addition, the Sonoma County Transportation Authority/Regional Climate Protection Agency (SCTA/RCPA) was deeply involved in the development of the RED, demonstrating a model for regional planning and providing critical policy advice. Sonoma Clean Power, California Forward, Bay Area Council Economic Institute, and the Council of Infill Builders all provided strategic assistance in the formation of RED, and the Federal Reserve Bank of San Francisco convened financial institutions to discuss innovative financing tools.

New partnerships with the Community Foundation of Sonoma County, the Santa Rosa Metro Chamber, and various housing advocacy organizations are being pursued as well, recognizing that all have a role in addressing the housing crisis against the backdrop of disaster recovery and climate change.

The October 2017 fires exacerbated an existing housing shortage in Sonoma County and caused significant increases in rents and home prices.  Rising costs - before and after the fires - have caused workers to commute long distances or move away, making it harder to recruit and retain a skilled workforce and contributing to GHG emissions.  Residents who remain in the county are spending a higher percentage of their income on housing, resulting in reduced spending power, which is especially challenging for those experiencing poverty. 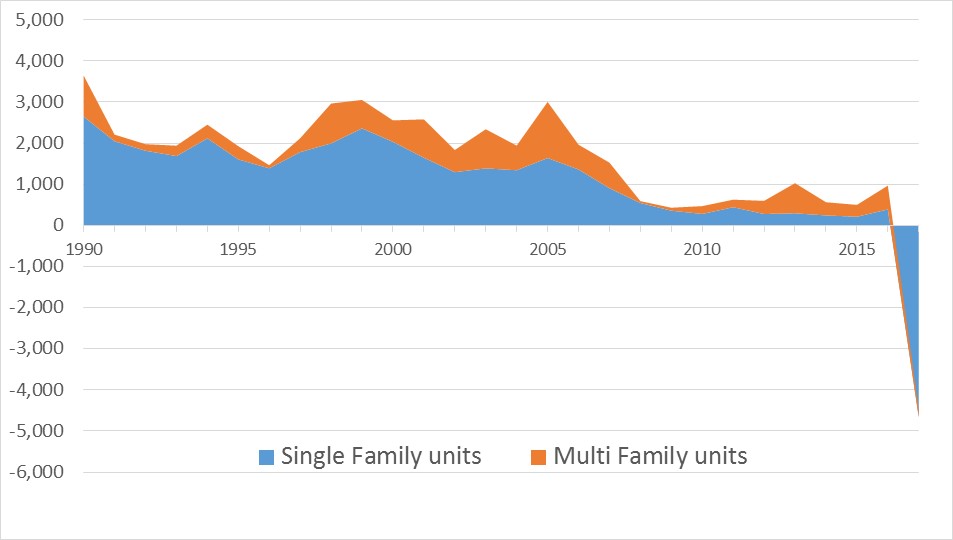 In creating the RED, local leaders recognized that if the pace of housing production is not accelerated well beyond historic levels, the impacts on the climate, economy, quality of life, and health and well-being of Sonoma County residents could be dire. They also recognized that relying on existing models of entitling and financing home building would need to change significantly in order to overcome barriers to infill, mid-to high density, transit-oriented development.

The William and Flora Hewlett Foundation provided a $1 million, two-year start-up grant to help fund initial operations.  Other planning grants available through the State have been and will continue to be sought after.

The RED was created by local elected leaders to frame the governments’ response to pre-existing housing challenges exacerbated by climate impacts, most notably, wildfires in 2017. The effort was informed in part by the County Board of Supervisors’ housing workshop in February 2018, which brought testimony from a wide range of organizations, including banks; builders; non-profits; and federal, state, and regional agencies.  These experts spoke to the need for new ways of doing business, the barriers to development, and the important role local government must play in leading a housing agenda.  The City of Santa Rosa convened separate but related groups, including private developers from throughout the Bay Area, to focus on ways to streamline permitting; the City has subsequently changed ordinances to reduce fees, increase height limits, and expedite permits, and is currently creating, with community engagement, a new Specific Plan for its downtown area.

Vulnerable populations and communities have not yet been engaged directly by the RED, but they will be in the coming months in the context of the local Assessment of Fair Housing, which will examine the nature and extent of housing disparities and seek community input into the ways in which new housing programs and projects must change to better serve marginalized communities. The Sonoma County Community Development Commission has launched a housing equity agenda and is focusing initial engagement efforts with LatinX leaders and community members. By visiting with existing grassroots and community-based groups and hiring community residents to canvass their neighbors to complete specific surveys, existing published demographic data can be “ground-truthed” to paint the story of unmet needs.

RED’s creation is a direct result of the 2017 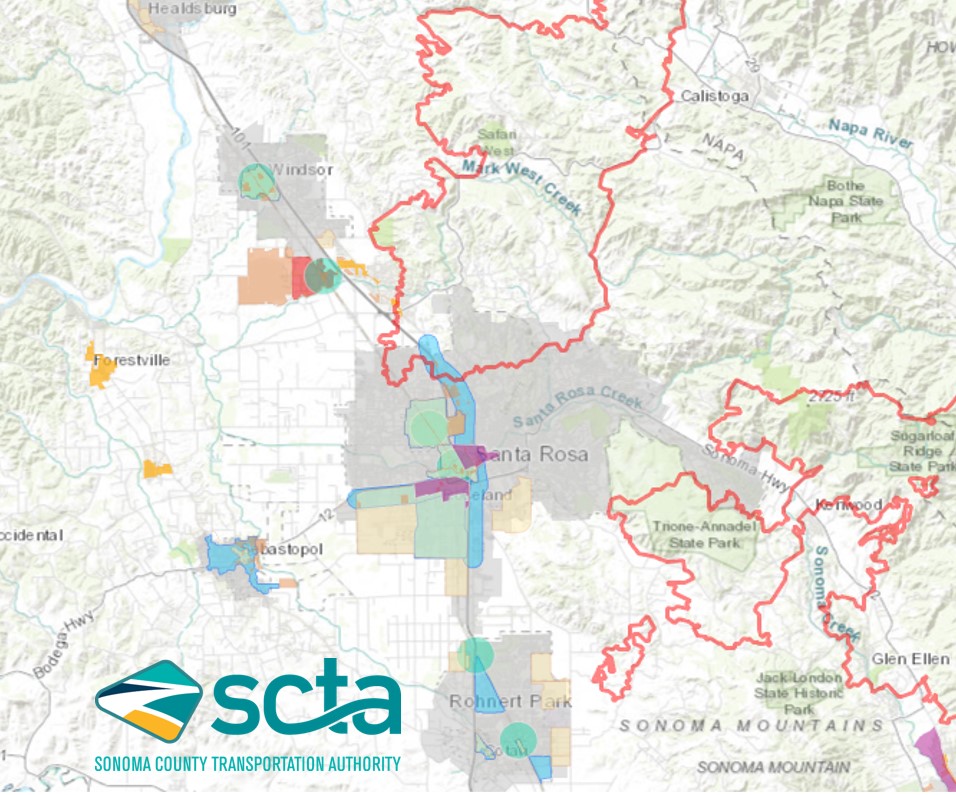 wildfires.  It seeks to incentivize resilient and above-code construction methodologies and focus development in urbanized, transit-oriented areas of the County. The dual mandate is clear: improve resilience to catastrophic wildfire, while ensuring that new housing is as climate smart and energy efficient as possible.

RED will focus development on infill sites, at a scale appropriate to the individual communities. Reducing demand for homes in the wildland urban interface, while providing greater housing choice in walkable neighborhoods, and strategically using publicly-owned land near transit, jobs and services are all objectives that will strengthen resilience.

While not directly attributable to RED, the County Board of Supervisors adopted a Climate Emergency Ordinance in September, 2019 which speaks to the local recognition of how sometimes-competing goals of creating new homes and urgently addressing climate change must continually be reconciled. Santa Rosa is expected to take similar action.

While start-up funding was provided by the Hewlett Foundation, ongoing funding for administration and project development is anticipated to come from new State housing sources and the formation of innovative financing methods. By assembling public and private capital in new ways, the local jurisdictions have the opportunity to secure an equity stake and long-term economic returns from developments that meet key objectives and reinvest those returns back into the system.  Additionally, RED will analyze property tax data to inform possibilities, including Enhanced Infrastructure Financing Districts and Educational Revenue Augmentation Fund (ERAF) backfill scenarios.

RED has been using planning tools through SCTA/RCPA to model density scenarios for traffic and other impacts to benefit decision-makers, including local planning staff. Data developed for the Assessment of Fair Housing, including neighborhood profiles and various disparate impact housing measures, will also inform strategy and priorities. Additionally, with the support from the Kresge Foundation, the Urban Land Institute (ULI) has been invited to assemble a Resilience Advisory Panel in December 2019, hosted by SCTA/RCPA, to assess community preparedness and wildfire resilience in relation to land use and development strategy and the local energy grid.

The project continues to face challenges related to operationalizing the concepts of organizing capital in new ways, streamlining entitlements in the face of CEQA, neighborhood opposition to increased density on key publicly-owned parcels, and taking a shared approach between the County and the City of tackling the most pressing housing challenges. With more time, the new governance model is expected to help overcome these challenges. 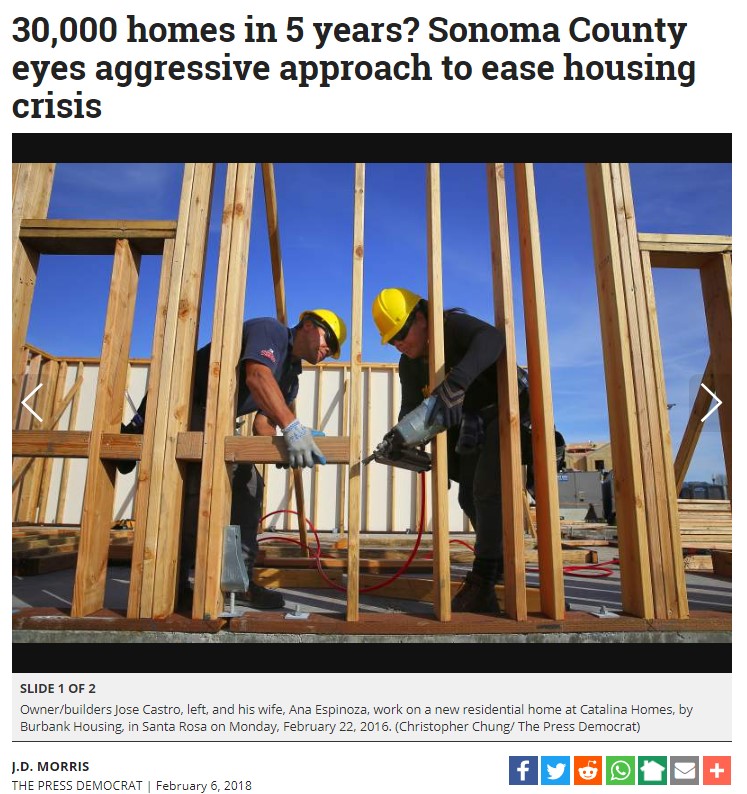 RED is built on the idea that the housing needed will be produced by the private sector and that local government’s role is to create the conditions to spur the kind of development that will meet established goals.  Reducing cycle times for all parts of the entitling process, improving use of climate-friendly construction techniques, providing financing options that can leverage private debt and equity, and strategically using publicly owned land are all outcomes that RED leaders will strive for in the first two years. Success will ultimately be measured by both the mitigation of climate impacts like catastrophic wildfires and floods, as well as by the actual number of units produced in the next five to ten years as compared with the pace of construction over the prior decade.

Results will be self-evident, and—if after two years, momentum is building such that other cities can see the benefits and decide to join the effort and cement the regional model—that will hasten further success.

RED is a replicable model for other regions where inter-jurisdictional trust is high and the participating entities are prepared to share resources—land, funding tools, regulatory authority, a focus on climate adaptation, and staff expertise. 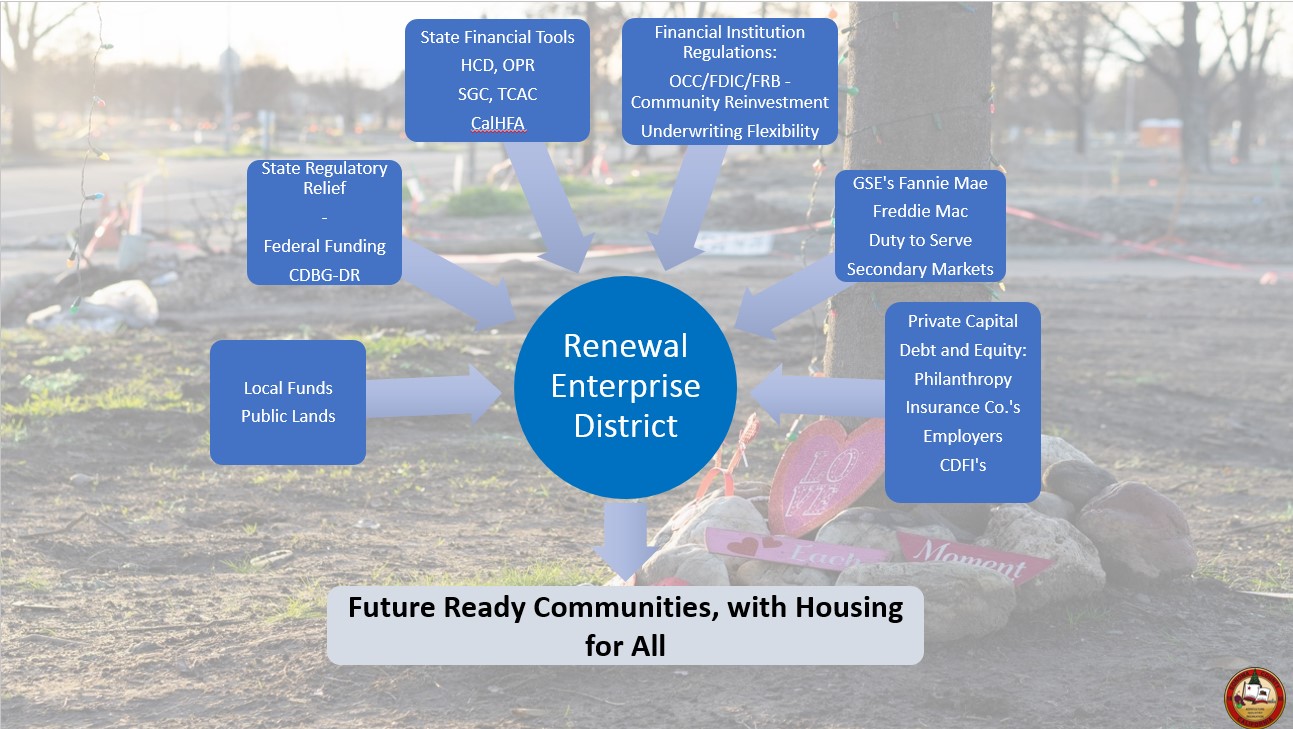